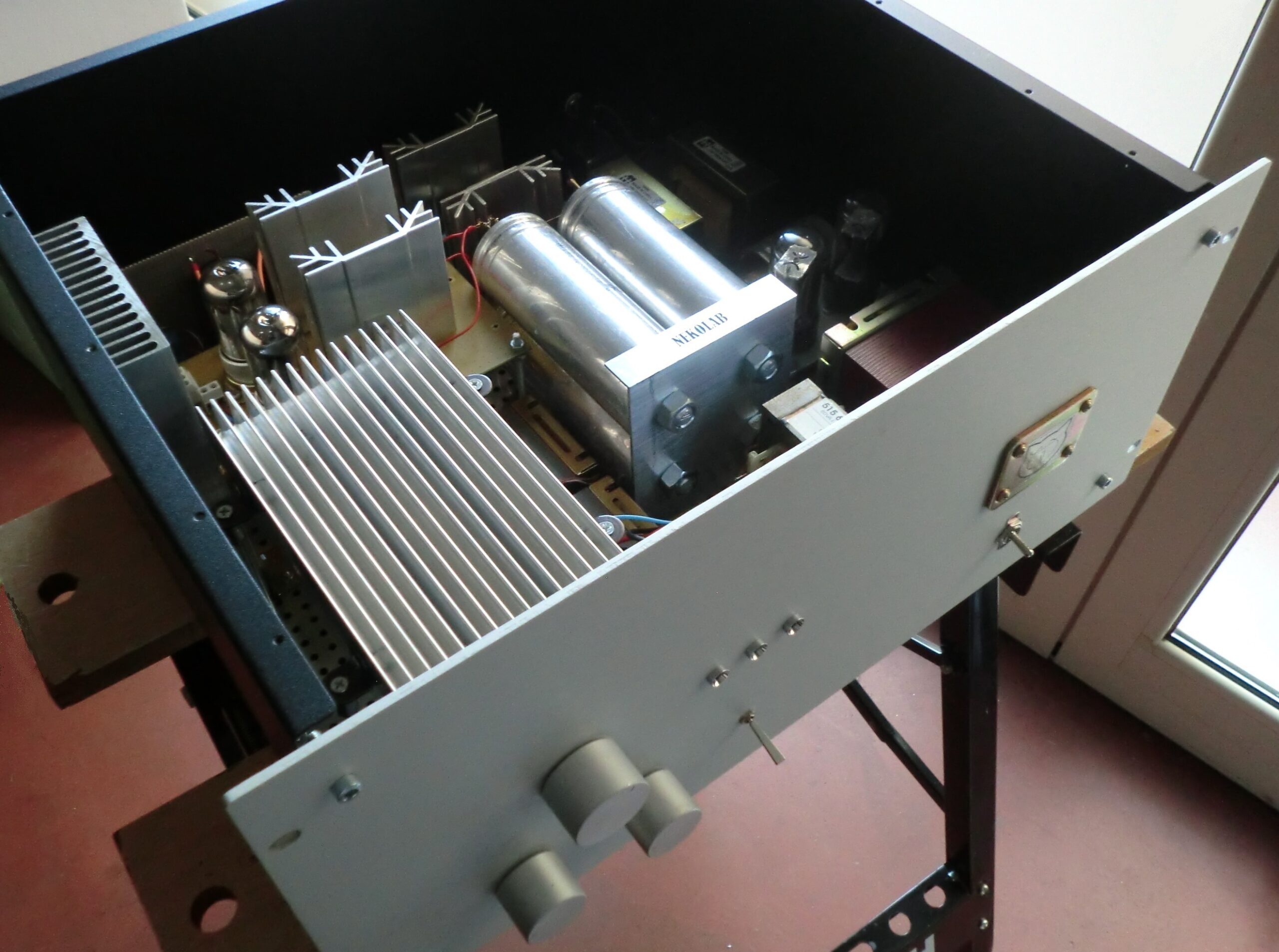 Over the past 10 years I have focused on Russian tubes from the era 1960-1980 and have discovered numerous types with very interesting characteristics. Signal tube like 6n6p, 6j51p, 6j9p, the high gain planar triode 6s17k, the strong, linear driver as 6e5p, power tubes like 6c4c, 6c33c, 6s18s and 4p1l. This last DH ( direct heated ) pentode has the reputation of amazing performance and low distortion in triode mode. After many days of breadboarding, testing and listening I concluded this 4P1L is probably my favourite line preamp tube. The biggest flaw? You have to tame her singing (i.e. microphonic noise).The 4P1L wired in triode will have a µ=10 and an Ra=1.6kΩ. I don’t want to lose much gain and I choose a cascode CCS ( Constant Current Source ) using DN2540 depletion mosfet as anode load. This approach maximizes the gain to near mu ( 100 MΩ output impedance = near horizontal load line ) and increase the PSRR factor ( Power Supply Rejection Ratio ). I test transformer load also but, in my opinion the cascode CCS is the best setup for 4P1L, with highest driving capability, low distorsion, extended top octaves, fast transients, and a taut, muscular low end. I measured a flat response as well as great bandwidht from 10Hz up to 1MHz ( with no global feedback ). The preamp schema is a classic common cathode using filament bias, consequently eliminating the need for cathode decoupling capacitor. I parallel the filaments to increase the filament current which helps keeping the filament resistor value low which doesn’t impact the output impedance much.

Look at the anode curve, a good operating is: 160V on the anode, -8.7V of bias, 30mA through the tube. The filament resistor then should be 15Ω ( 8.7V/(550mA+30mA) ). The quality of this resistor is fundamental. Remember that any resistance in the cathode (e.g. the filament bias resistor) is reflected int the anode at (μ+1) times. I use a non inductive TO220 style Caddok 15 Ω 1% 30W mounted on good heatsink. The higher power handling capacity the better as it will help keeping the thermal noise down. Pin 5 of 4P1L is the internal shield: must be connected at the metal chassis ( not signal ground ). For the grid, gate, base stopper resistors use carbon composition type. On pin 6 ( grid ) I used a relatively large value ( 3.3 KΩ ) to hold off any microphonic effect. Billie is a DHT preamplifier: any noise in the filament circuit will be amplified. Keeping this in mind the filament power supply has been made with a double secondary ( 20 V @ 1 A ) power transformer for Left – Right filaments. For the bridge rectifiers I used MBR10100 Schottky type diodes followed by a CLC ( 22.000µF-300mH@1A-22.000µF ) ripple filter plus a capacitor multiplier ( Darlington D1 – TIP142 ). On the filament second leg I put a constant current source ( Darlington D2 – TIP142 ) with the possibility of a fine output current adjustment ( T1 BC337 ). Set 500Ω trimmer to read 0,825 V across 1,5 Ω resistor ( 550mA ). Use an adeguate heathsink for darlington transistors: they dissipate a lot of heat. The high voltage anode power supply has been done with a 320V @ 100mA CT winding main transformer as well as a 6,3 V @ 3 A for 6AX4GTB tube rectifiers filaments. The ripple smooting filter consists in a double LC stage followed by a double STW7NK90Z power Mosfet regulator ( separate for R, L channel ) to ensure a power supply as quiet as possible. All capacitors are 600V polypropylene in oil, filter choke 15H/100mA, two zener 1N5382B for 275 V output anode supply. I actually spent quite a lot of time comparing volume controls in my linestage preamp. This was a few years ago so I don’t recall all the details offhand. Leaving out at the moment the TVC ( transformer volume control ) as too expensive, I test the usual carbon type ( Piher, Alpha,…) , Alps RK40 Black Beauty, Alps Blue RK27, Dale stepped attenuator, Noble and other…. all a little colored and unmusical in my opinion ( a bit warm in tonal balance and it slightly softens the upper treble ). I can say the usual carbon type ( Piher, Alpha,…) was the best sounding of the lot. The Dale stepped attenuator was very good, probably more neutral of the bunch, but the steps toward the bottom of its range were too much of a jump for me. Usually I don’t use a stereo potentiometer for volume and balance but a single carbon type for left an right. In this way, perhaps it is more unhandy, but the signal only passes through one device and not two.

Sound-wise: I’m surprised with this preamplifier it’s great: it exhibits incredible detail retrieval, fast transients, bold and nuanced tonal color, outstanding dynamic range, and large soundstages  I have to say that it sounds amazing, sensuous and intimate in its quiet passages, thrilling in its loud, soaring moments. Detail and nuances I may never have heard become clearly evident. Vocals sound so smooth, intimate and real….my tribute to the greatest jazz singer ever……